After being diagnosed with leukaemia and emphysema in 2010, the writer and broadcaster Clive James said that his terminal diagnosis led him to "start saying goodbye" through his poetry. He died in November 2019.

Speaking to The Independent newspaper, James said: "You have to have lived for a long time and be approaching the end of your life before you can see the world as I see it now, so I’m quite pleased with that even though I’m a bit terrified because it really is the mark of the end, isn’t it? One’s hoping to make a good exit."

Why he wrote the poem

One of his poems, Japanese Maple, is about a tree given to him by his daughter. In this deeply poignant poem, James delights in the tree's soft presence in the back garden of his Cambridge home, while challenging himself to live until autumn in order to see its leaves "turn to flame".

Writing in The Guardian, fellow poet George Szirtes says: “We read the poem as a formal and elegant valedictory, and since form – especially as rhyme – is an aspect of wit, we understand it as wit too, and admire it all the more for that. It is of a piece with the other productions of Clive James, intelligent, witty, skillful, highly crafted and, under the lightness, serious: deadly serious in fact.”

Japanese Maple follows James' poem, Sentenced to Life, in which he revealed his longing to return to Australia, and in particular Sydney, and "bask in the light I never left behind".  Due to his condition preventing him from flying, this desire was never fulfilled.

Instead, in Procedure for Disposal, published in 2011, he wrote, "Then send my ashes home, where they can fall In their own sweet time from the harbour wall."

James' UK publishers, United Agents, have given their permission for Dying Matters to publish Japanese Maple.

Your death, near now, is of an easy sort.
So slow a fading out brings no real pain.
Breath growing short
Is just uncomfortable. You feel the drain
Of energy, but thought and sight remain:

Enhanced, in fact. When did you ever see
So much sweet beauty as when fine rain falls
On that small tree
And saturates your brick back garden walls,
So many Amber Rooms and mirror halls?

Ever more lavish as the dusk descends
This glistening illuminates the air.
It never ends.
Whenever the rain comes it will be there,
Beyond my time, but now I take my share.

My daughter’s choice, the maple tree is new.
Come autumn and its leaves will turn to flame.
What I must do
Is live to see that.That will end the game
For me, though life continues all the same:

Filling the double doors to bathe my eyes,
A final flood of colors will live on
As my mind dies,
Burned by my vision of a world that shone
So brightly at the last, and then was gone.

As a society we need to be braver about talking about death, dying and bereavement, and better at making sure the right plans are put in place to protect ourselves and our loved ones at the end of life. 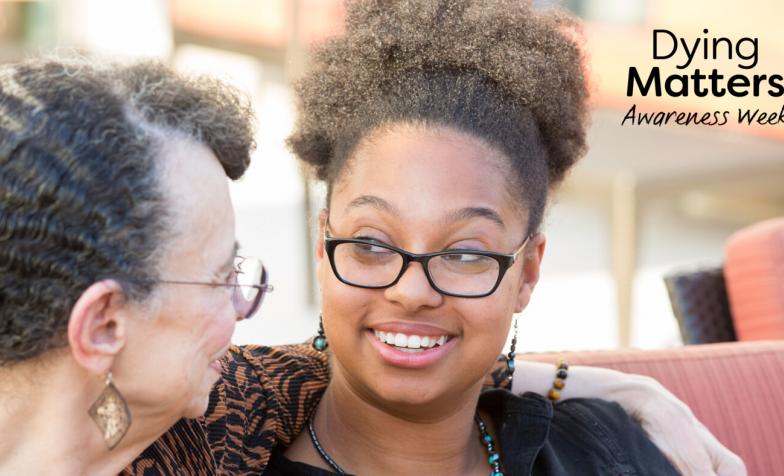 From 1 - 7 May 2023, we're encouraging communities across the country to come together to talk about death, dying and grief.
Find out more
Share this page
More from Dying Matters